Tolliver was self-taught and signed his work, “Mose T” with a backward “s”. He regularly worked with “pure house paint” on plywood, creating whimsical and sometimes erotic pictures of animals, humans, and flora. His familiar themes also included watermelons and birds. Tolliver’s painting style is referred to as flat, full frontal or straight profile with a muted palette. A “Quail Bird” may glide over a cotton field, or a spread-leg “Diana” or “Moose Lady” may be straddled over an exercise bicycle rack. Never able to walk well following his injury, he painted many self portraits with crutches or would sit on his bed and balance whatever surface he was painting on, on his knees. Tolliver’s themes were drawn from his own experience.

Tolliver’s work has been exhibited in the Smithsonian American Art Museum in Washington, DC, and at the Philadelphia College of Art, Montgomery Museum of Fine Arts, and the Corcoran Gallery of Art. Relatives of Tolliver have imitated his style and signed their work as he did, making it sometimes difficult for collectors to find an original painting. 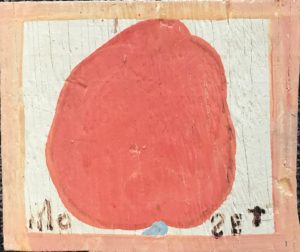